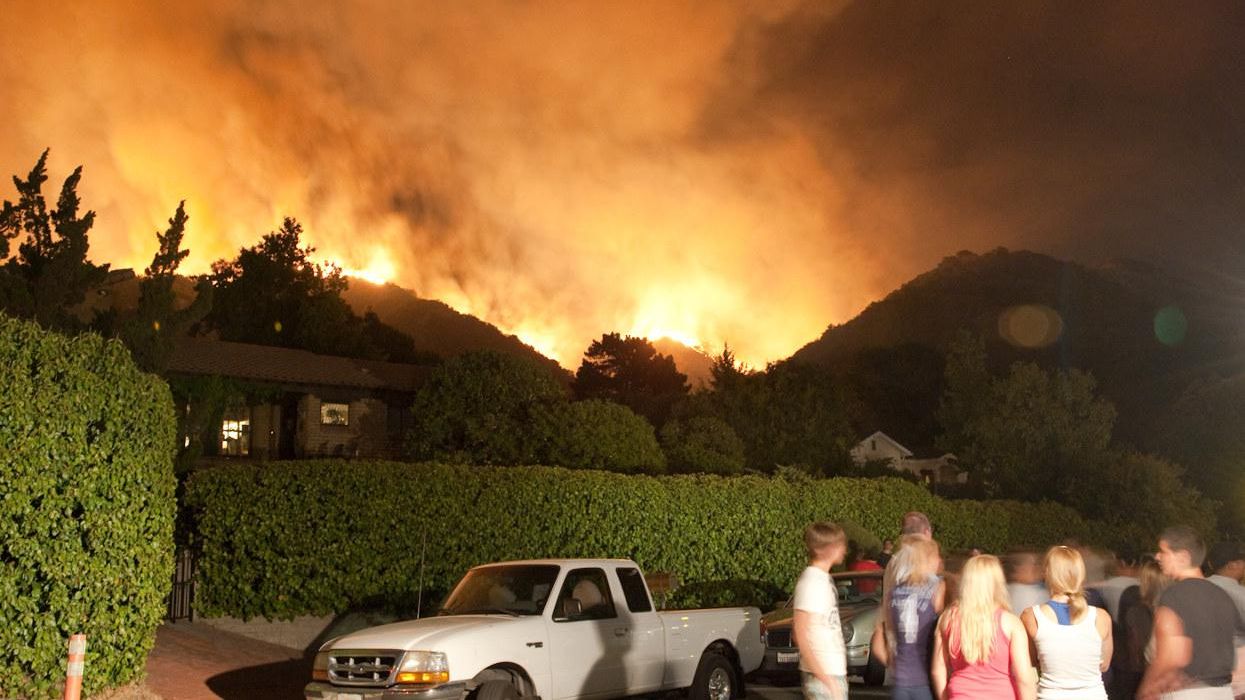 Out of the airplane window I saw a smoke plume in the distance towering thousands of feet above the burning forest floor.

It was the 2019 Shady Fire raging 150 miles northeast of Boise, which had started two weeks earlier after a lightning strike set the central Idaho wilderness ablaze. At first, I was unmoved. As someone who has lived in California my whole life, wildfires have become background noise. It’s just another season. Some places have rain, some places have snow. My state has fire.

It has gotten to the point that every year I find myself wearily going through the same checklist each time a fire inevitably ignites nearby. Is my family safe? Check. Are my friends safe? Check. Is it safe to breathe the outdoor air?

But my aerial view of the Shady Fire jolted me. I stared at the fire as it relentlessly spewed out a thick cloud of smoke. Finally, the reality dawned on me. I was witnessing a devastating climate catastrophe unfold.

I was shaken from my thoughts as the plane turned and descended. Our nose was now lined up with the column of smoke. “Thirty seconds out,” my colleague yelled into the headset. I took a deep breath, bracing myself for what I knew would come next. 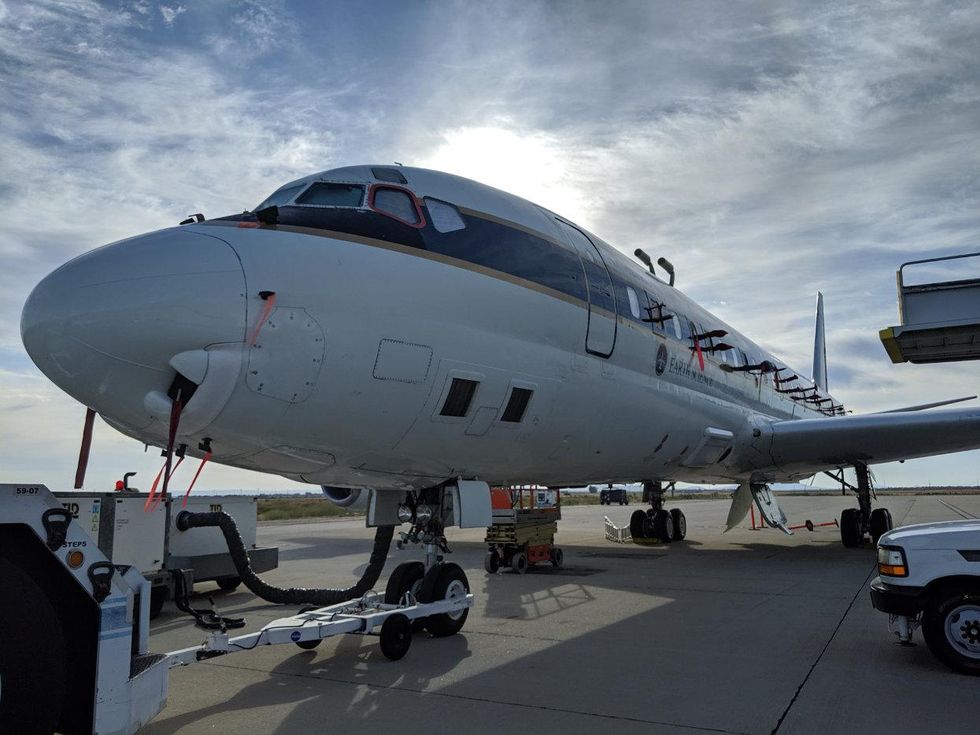 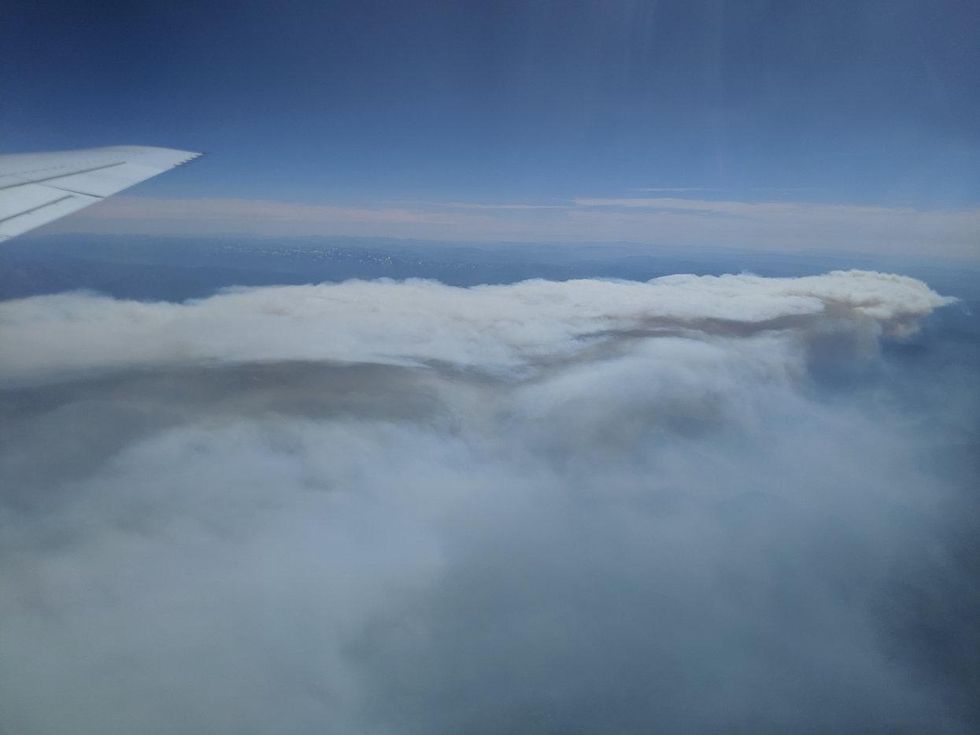 The plane passed directly over the flames. Convection created by the superheated air tossed us around like a rag doll—up, down, and side to side. The sun became a faint orange dot as the smoke enveloped us. The smell of burning vegetation permeated the cabin. And then, as quickly as it began, it was over. That was, of course, until the plane turned around, readying itself to make another pass through the smoke. I had less than a minute before we began zig-zagging our way down the plume. I hastily readied my mass spectrometer for another round of air sampling.

This wasn’t your typical commercial flight. I was aboard the NASA DC-8, a 50-year-old retrofitted jetliner filled with scientific equipment. For six weeks, my colleagues and I chased wildfires across the U.S. as a part of FIREX-AQ, a collaborative field campaign co-led by NASA and the National Oceanic and Atmospheric Administration (NOAA). As atmospheric chemists, one of our goals was to measure the chemical composition of smoke and uncover how it changed over time. Why? This information could prove valuable to the public health officials responsible for predicting fire-related air quality hazards, especially as fires become the norm in the Western U.S.

While most wildfires are considered natural phenomena, climate change and poor forest management practices have increased their frequency and severity around the world. Over the past decade, my state has witnessed eight of the 10 largest fires recorded in its history, the biggest of which occurred in 2020.

This essay is also available in Spanish

And it’s not only the flames that are dangerous. The amount of land burned is miniscule compared to the area that is blanketed by smoke. Combined with the wildfires in Washington and Oregon, 50 million people experienced prolonged exposure to unhealthy air quality in the past year alone.

There were more than 30 casualties directly attributed to the 2020 West Coast wildfires. But the quantity of deaths isn’t always the most important metric. Because, while the fires themselves don’t discriminate, there are systems in place that do. Even though no one has reported on the demographics of the victims, history tells us they were more likely to be elderly and disabled, as has been the case with wildfires of the past.

Not to mention, there are those that are also disproportionately affected by the smoke. Stealing a phrase echoed throughout the COVID-19 pandemic, “pre-existing conditions” increase the risk of severe outcomes when it comes to smoke inhalation. Yet for some reason, few researchers have included people with these conditions in their studies. Perhaps that’s because there are so few disabled researchers in science and medicine, or perhaps it’s because the systemic ableism in our society devalues disabled lives.

Either way, the disabled community—my community—is especially vulnerable to the devastation of wildfires. But few outside the community itself have cared enough to investigate and mitigate this environmental injustice. 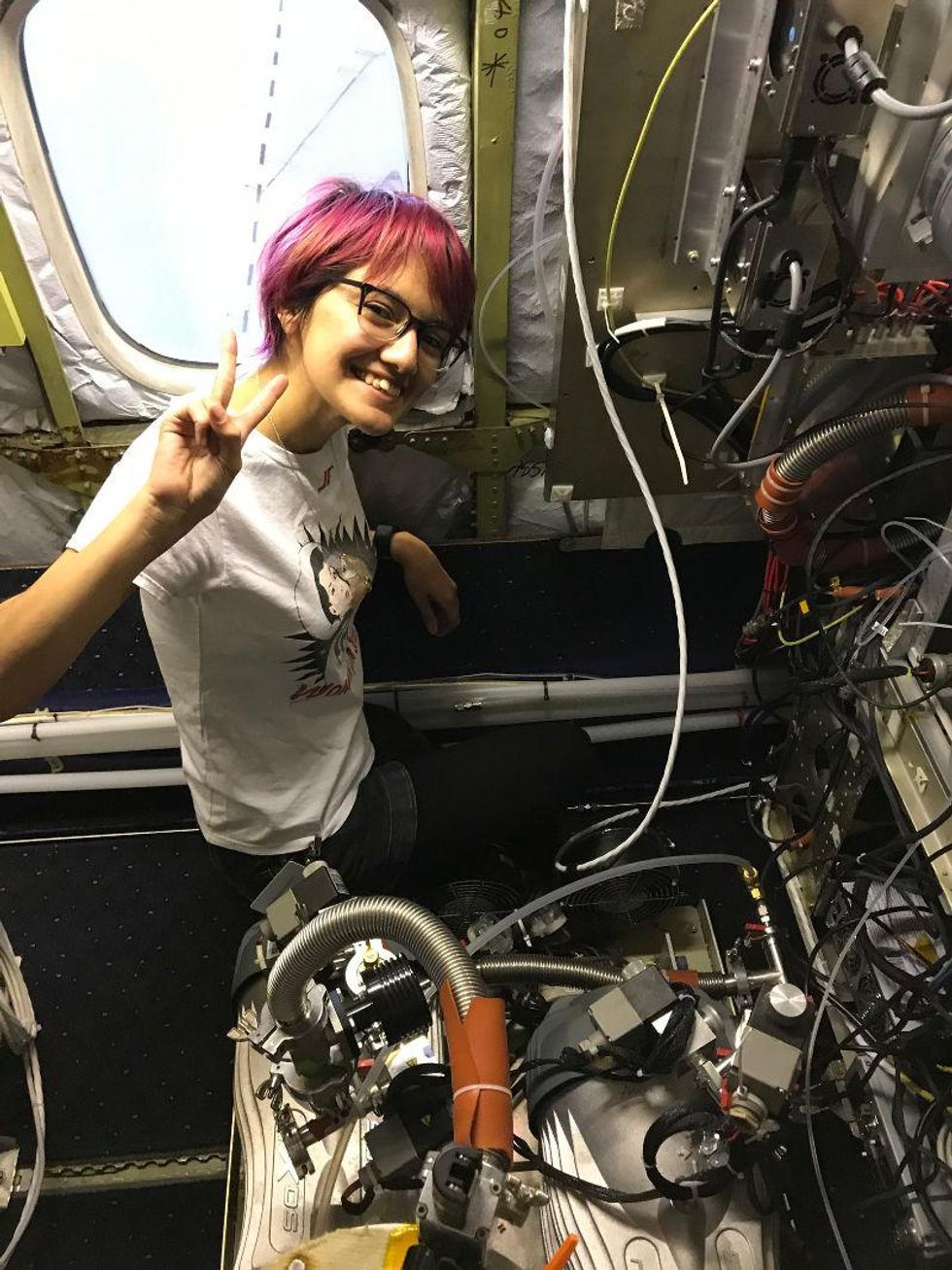 A few months after returning from FIREX-AQ, I was running an experiment in my lab located two floors below ground. Out of nowhere, a thought crossed my mind: If the fire alarm went off and I suddenly had to evacuate, could I make it up the stairs to the ground floor exit? You see, three years ago I became disabled due to a chronic health condition. My mobility is frequently impacted. That day, even with my cane, walking across the lab was a feat on its own.

Disabled people regularly get left behind during all sorts of emergencies. In school settings, students with disabilities are frequently left inside classrooms during fire-related evacuations. Similarly, all three aspects of the “Run, Hide, Fight” strategy used during active shooter drills can be difficult for many disabled students to perform without assistance. This neglect exists beyond classrooms. During 9/11, even though most of those working below the impacted floors survived, disabled occupants were the notable exception. The country saw a similar situation play out just months ago during the January 6 Capitol riots when Senator Tammy Duckworth, a wheelchair user, faced difficulty evacuating due to inaccessibility.

But in an effort to get back to work, I managed to temporarily convince myself it would all be okay. I’ll find a way to safety, I thought optimistically. The truth is, even though I am a scientist who has the privilege of studying wildfires, that doesn’t necessarily mean I have the privilege of being able to escape them when it matters the most.

Having a disability should not be a death sentence, but it often is when catastrophe strikes. Worldwide,
a survey from the United Nations highlights that out of 6,000 disabled respondents, only 20 percent said they would have no difficulty evacuating during a “sudden disaster event.” In the U.S., we are 2 to 4 times more likely to be seriously injured or killed due to a natural disaster. This would explain why so many people who have died in U.S. wildfires were disabled in some way.

However, we are rarely harmed by the disaster itself. Rather, we fall victim to inaccessible crisis planning and recovery efforts such as emergency communications that fail to account for people who are blind or deaf, as well as shelters that fail to stock the medical equipment and assistive technology so many disabled people rely on. And there are plenty of other “hidden victims” who remain unaccounted for—that is, disabled people harmed not by the flames, but as a result of health complications triggered by the smoke. 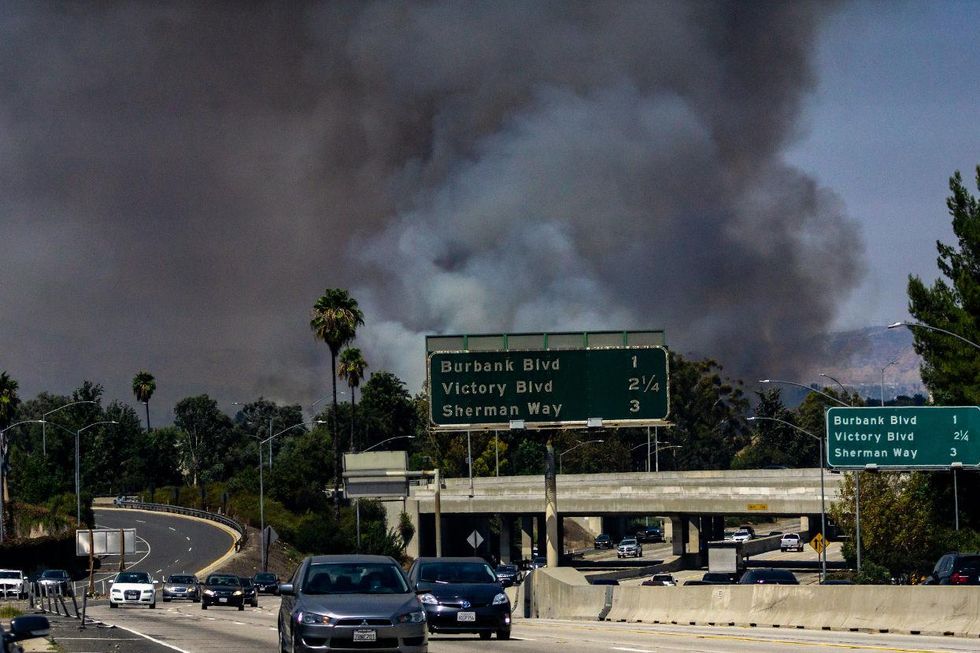 Smoke is made up of a complex mixture of gases and particles that can engulf an area for weeks at a time. This chemical soup is continuously evolving, and its composition depends on a number of factors, including, but not limited to, how far the smoke has traveled. When inhaled, each of these compounds can impact our health in a number of ways—such as damaging our lung tissue. Many of these compounds are the subject of ongoing research.

For most, the smoke will be nothing but a nuisance. However, for certain so-called “sensitive” groups, the smoke is just as dangerous as the fire itself. But who’s considered sensitive? According to the U.S. Centers for Disease Control and Prevention (CDC), this includes people with heart or lung diseases, as well as children, older adults, and pregnant women.

That’s far from a complete list. If it was, then I shouldn’t have felt any ill effects last year from the Bobcat Fire when it raged near my Los Angeles home. After all, I never had an issue with wildfire smoke before. And even though that was the first time I had to deal with prolonged exposure to smoke since becoming chronically ill, my condition doesn’t fall into any of the CDC categories. I thought I had no reason to be concerned assuming I followed all of the recommended public health guidelines.

But as the smoke-filled air entered my home through gaps in my window seals, I started to experience increased exhaustion, muscle aches, inflammation, brain fog, and migraines. I wasn’t alone, either. Other chronically ill people with a range of conditions struggled with the smoke just like me, especially those who experience systemic inflammation, like people with autoimmune diseases or mast cell activation syndrome.

Unfortunately, anecdotes are all I’ve been able to find. There’s a dearth of research on the topic. Public health is so focused on how these fires affect non-disabled people that it often fails to consider that the health of disabled people matters, too.

Twenty-five percent of Americans identify as disabled. That’s more than 82 million people. Many of us also span across several marginalized identities; race, disability, and poverty are inherently linked and make us particularly vulnerable in a world where natural disasters are becoming the norm.

Yet, even though it’s been 30 years since the passage of the Americans with Disabilities Act, my community is still at risk. We need emergency communications that are universally accessible. We need shelters that can accommodate service animals and mobility aids. We need research that identifies who is at highest risk for health complications following smoke exposure.

Perhaps most importantly, we need to ensure disabled people are among the scientists, public health officials, and policy makers responsible for these decisions because who better to know what’s best for the community than the community members themselves?

I remember my time on the airplane fondly and my experiences there as a disabled researcher have guided my professional interests since. But I also recall how I was nearly denied clearance to fly simply on the basis of my disability. I fought against this discrimination, and fortunately, I won. That’s not something many others in my position can say.

But what if I hadn’t? Would this essay even exist? 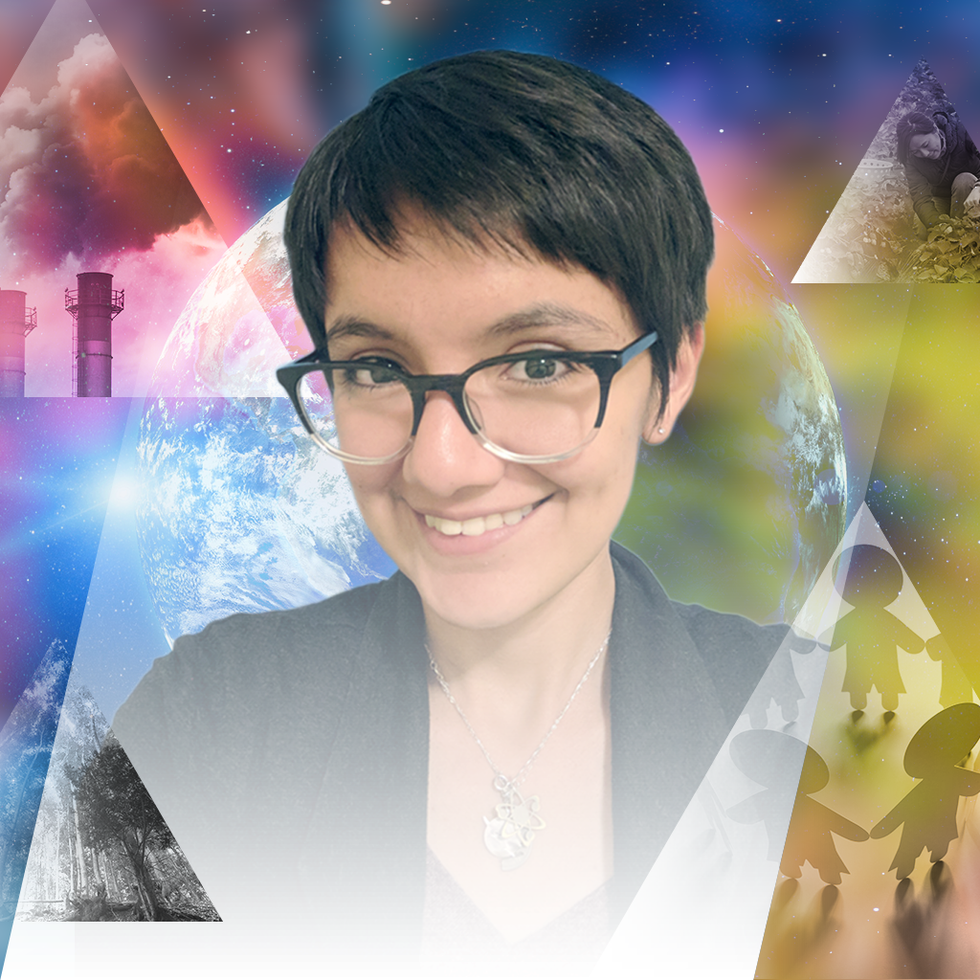 Krystal Vasquez is a Ph.D candidate in the Division of Chemistry and Chemical Engineering at the California Institute of Technology. You can reach her at kvasquez@caltech.edu or on Twitter @CaffeinatedKrys

This essay was produced through the Agents of Change in Environmental Justice fellowship. Agents of Change empowers emerging leaders from historically excluded backgrounds in science and academia to reimagine solutions for a just and healthy planet.

Banner photo: Residents gather at a neighborhood checkpoint during the evacuation of Los Angeles’ Briggs Terrace neighborhood as the Station Fire threatens the area in 2009. (Credit: Anthony Citrano/flickr)