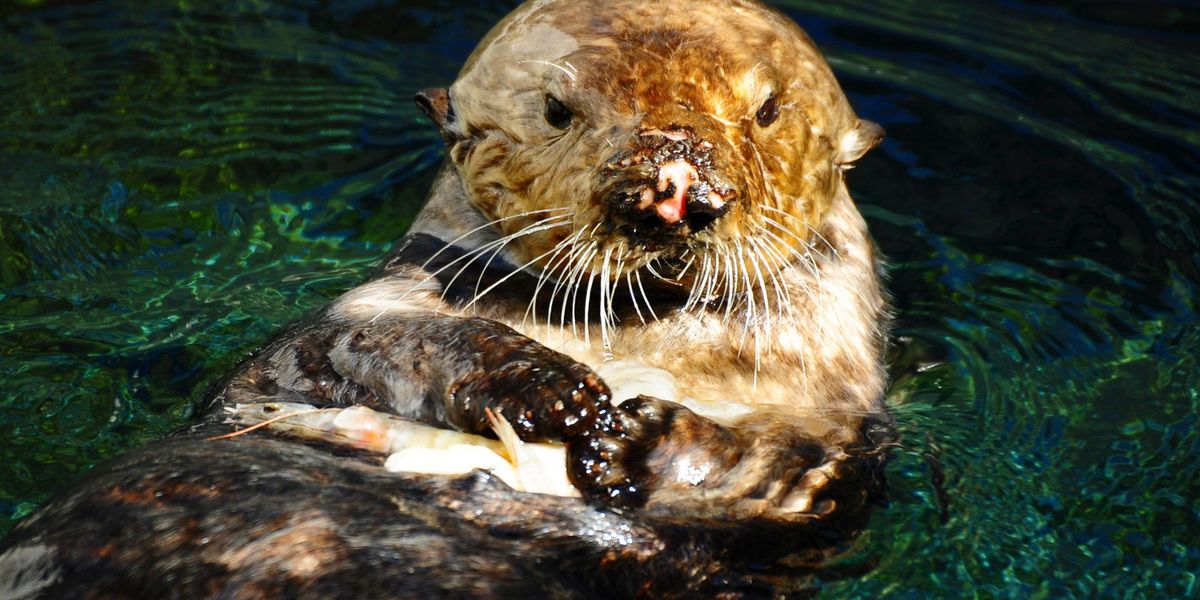 Within the past decade, those working on the frontlines of marine health have treated an unprecedented number of animals poisoned by harmful algal blooms.

“It’s really heartbreaking,” Smith told EHN. “A lot of times it’s the adult female sea lions and they’re in really bad condition, they have seizures, and a lot of times they can’t recover.”

The culprit behind these episodes: domoic acid. This biotoxin accumulates in the food web during algal bloom events and causes severe health effects in larger animals, humans included.

Now, researchers warn that the potent toxin targets the hearts of sea otters, threatening already sensitive populations, according to a recent study in the Harmful Algae journal.

The study, which monitored 186 free-ranging sea otters between 2001 and 2017, found that long-term exposure to domoic acid raises their risk of fatal cardiomyopathy, which makes it harder for the heart to circulate blood throughout the body, by 1.7 times, on average.

“Cardiomyopathy in sea otters can be incredibly severe,” Cara Field, medical director at the Marine Mammal Center in California, told EHN. “The main effect domoic acid has on the heart is it binds to cells that tell the heart how and when to beat and because of that, it causes one or more of the heart chambers to not eject blood through the body well.”

Some sea otters in the study that ate large amounts of crab and clam were 2.5 times more likely to suffer from the heart disease. Crabs and clams are effective bioconcentrators of domoic acid, meaning the toxin is higher in those creatures than in the surrounding water.

The study also found that cardiac risks associated with domoic acid were “highest among adults of prime reproductive age – whose survival is critical to population recovery,” lead author, Megan Moriarty, a free-ranging wildlife health resident at the California Department of Fish and Wildlife, wrote in a University of California, Davis article.

North America’s sea otters have had a difficult journey. In Oregon, they were eliminated by 1906 when the last sea otter was sold for its $900 pelt. In California, they were considered extinct until 1938, when a group of around 50 was found outside of Big Sur. There are now fewer than 3,000 sea otters off the California coast, according to a United States Geological Survey census.

Today, while shark attacks and injuries from mating are the leading causes of death in sea otters, disease—often the result of pollution—is also a massive stressor. For example, up to 70 percent of stranded southern sea otters were infected with toxoplasma at one point, an illness sometimes caused by cat feces flushing into the oceans.

“There is a long list of infectious diseases in sea otters and many of them are washed in from the land,” Kevin Lafferty, an ecologist at University of California, Santa Barbara’s Marine Science Institute, told EHN.

As sea otter populations suffer, so do the ecological services they provide.

“Sea otters increase standing kelp by consuming significant amounts of kelp herbivores,” John Goodell, director of science and policy at Elakha Alliance, an organization dedicated to reintroducing sea otters to the Oregon coast, told EHN. “By doing that, they can dramatically transform the rocky subtidal ocean environment into a very vibrant kelp forest, and that provides habitat for a lot of juvenile and adult fish.”

In the remote Aleutian Islands of Alaska, sea otters have been functionally extinct since the 1990s, likely due to increased killer whale predation, scientists say. This has transformed a set of dense kelp stands into what Douglas Rasher, a marine community ecologist at the Bigelow Laboratory for Ocean Sciences, calls “something of a barren wasteland.”

Between 2014 and 2017, Rasher repeatedly dove into the endangered kelp forests among the Aleutian Islands to monitor the cascading effects of sea otter loss. After sea otter decline, sea urchin populations, a major source of prey for them, grew rapidly. The hungry shellfish chewed through miles of kelp, destroying habitats that many fish species needed to thrive.

“When sea otters were abundant, there were lush kelp forests as far as the eye could see,” Rasher told EHN. “When you dive on a reef where sea otters are missing, what you see is little to no kelp, and the rocky bottom of the seafloor is blanketed by large sea urchins.”

They even slow global warming. According to Harvard University, kelp forests can suck up 20 times more carbon dioxide per acre than terrestrial forests.

Algal blooms that are formed by toxin-producing diatoms of the genus Pseudo-nitzschia are responsible for domoic acid. While these species commonly bloom along California and other regions of the West Coast, they can expand their range as climate change warms northern waters, making conditions more favorable to them, Smith said.

For North America’s sea otters, this means that toxic algal blooms could intrude more on their northern habitats, up near Canada and Alaska.

When algal blooms proliferated from California to Alaska in 2015, historic numbers of dead sea otters were found washed up on beaches. More than 300 dead or dying sea otters covered the beaches of Homer, Alaska, that year, which was five times the normal count.

Climate change will also elevate the risks of nutrient pollution, which is the main human contributor to harmful algal blooms.

This form of pollution tends to come from nitrogen and phosphorus fertilizer runoff washing away from farms, which eventually makes its way into the ocean.

As extreme weather events become more common amid a changing climate, more rainfall will increase the amount of nutrient pollution reaching waterways by 19 percent, according to a 2017 study.

According to Kate Poole, senior director for the water division of the Natural Resources Defense Council, reducing algal blooms to protect sea otters is not a hopeless cause—but this must come with greater regulation of farm runoff.

“One thing we’ve been looking at is how cover crops, that you plant on farms during non-growing seasons, can help retain the soil and the pollutants on the farm,” Poole told EHN. “No-till practices also reduce that runoff.”

Poole also believes that national policy initiatives could reduce nutrient pollution. For example, she said the Environmental Protection Agency should introduce a limit on the amount of nitrogen pollution farms can contribute to waterways.

“We have seen this problem worsen in the last couple decades and it’s just going to get worse if we don’t start dealing with the causes,” Poole said.